The Man Who Shot John Lennon

The Man Who Shot John Lennon 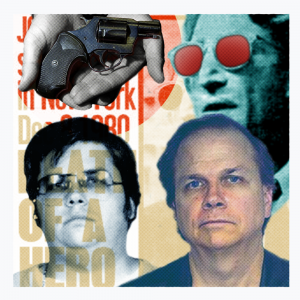 So who was Mark Chapman, if he wasn’t a paid assassin?

It’s too facile to write him off as a “deranged fan,” as has often been suggested. He was an ardent Beatles fan, like millions of others of his age.

Months after the murder he announced that he killed Lennon to gain prominence for promoting the reading of The Catcher in the Rye – the novel he had with him outside the Dakota.

But he never exhibited any strong feelings about the novel until shortly before the shooting.

The book, cult reading in the 50s, tells the story of a mixed-up teenager named Holden Caulfield who has to undergo psychiatric treatment. Caulfield is revealed as a sensitive young man disturbed by growing up in a world he believes is full of adult phoneys.

For a long time it was proposed that Chapman was experiencing a growing identification with Lennon – at one point even “re-baptising” himself as Lennon. He left his last job, for instance, signing himself out as “John Lennon,” then crossed out the signature.

For most of his life Chapman was superficially a normally social individual and a camp counsellor who had a special rapport with children. But there were dark shadows in the corners of his life.

He had been a mental institution patient and had twice tried to kill himself. Psychiatrists believed that almost certainly he would try to commit suicide again.

He was born in Fort Worth, Texas, in May, 1955, and grew up in America’s Deep South in  Decatur, Georgia. In his childhood the sound of the Beatles was everywhere. The world was changing rapidly from ballroom dancing and the big band sound to hard rock, hard drugs, easy sex and youthful protest.

In December, 1975, while he was at high school, Chapman cockily told friends: “About five years from now one of us will do something famous.” The timing was spot on, although infamous would have been a more appropriate word…