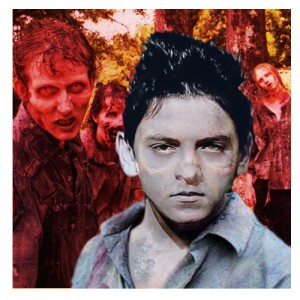 For 46-year-old Eldon Samuel Jr., seeing was believing. He took the zombie TV series The Walking Dead so seriously that he became obsessed with it, believing that it reflected reality.
Moreover, he convinced his 14-year-old son Eldon III that it was real – so real that on March 24th, 2014, the teenager thought his abusive, sometimes deranged father was turning into a zombie.

That night, police responded to a 911 call from a small house in Coeur d’Alene, Idaho. Waiting outside was Eldon III, his clothes drenched in blood.

At first, officers thought he had survived a frenzied attack in his home that had left his father and 13-year-old brother Jonathan dead, slain with a handgun, a shotgun, a knife and a machete. But young Eldon said he was the killer.

At the police station, after he had been taken into custody and given a change of clothing while his bloodied trousers and shirt were removed for examination, he volunteered to make a statement without a lawyer being present. He gave a blow-by-blow account of the carnage he had wreaked, claiming that his father, who would often beat him, had been going to kill him.

His father had been behaving crazily because of the painkillers he took. He had fired a pistol outside the house that evening and said they had to pack and head for the mountains because zombies were coming to get them.

The teenager claimed his father had started hitting him, saying he had been bitten by a zombie. Eldon III told the police that, in fear for his own life, he picked up a gun and shot his father. “I loved him,” he said, “but that’s self-defence, right?”