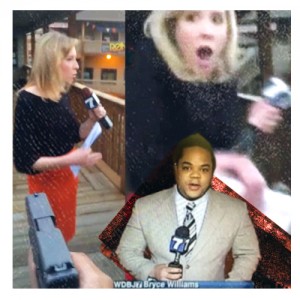 As interviews go, it looked like being an easy one when TV reporter Alison Parker, 24, was assigned to quiz a local businesswoman for a breakfast-time news programme on August 26th, 2015.

Alison worked for WDBJ7, a news channel covering south-west Virginia, and her interview with Vicki Gardner, 61, of the Smith Mountain Lake Chamber of Commerce, was to be broadcast live. So with her cameraman colleague Adam Ward, 27, Alison duly set out for the lakeside shopping mall in the town of Moneta where the interview was to take place. Eager to promote local tourism, Mrs. Gardner greeted them on their arrival.

What could possibly go wrong? Everything, the world would soon know as the catastrophic news of what happened next went global.

At 6.45 a.m., standing on the elevated wooden walkway of the shopping complex, Vicki Gardner told viewers: “More and more people are visiting, spending time here, buying into the property…We want people to come here and see that…”

At this point a shadow crossed the viewers’ picture, eight shots rang out and Adam Ward’s shoulder-held camera hit the deck. “Oh my God!” Alison Parker screamed, as the transmission was switched back to the studio.

“OK, not sure what happened there,” the shocked presenter Kimberly McBroom told viewers. “We will, of course, let you know as soon as we find out what those sounds were from.”

Shortly afterwards, a video of the shooting was posted on the internet by the gunman, 41-year-old Vester Lee Flanagan. After unobtrusively watching from the sidelines as the interview began, this disgruntled, former WDBJ7 reporter (Flanagan reported for the TV station under the name Bryce Williams) had suddenly stepped forward to slay his one-time colleagues.

With his mobile phone strapped to his forehead, he had filmed the scene before speeding away in his Ford Mustang, leaving Vicki Gardner shot in the back and Alison Parker and Adam Ward dying on the walkway from bullet wounds.

Flanagan’s video showed Alison gaping in horror on seeing his gun pointing at her as she was about to be shot at close range. Before firing 15 times, Flanagan was heard saying “Bitch!”