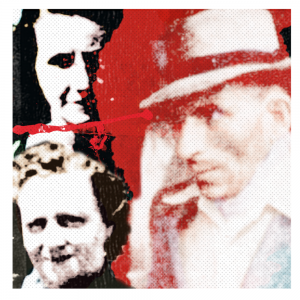 Lilly King woke up in the middle of the night and screamed. A man had crept into her bed alongside her.

She heard his voice coming like a whisper through the deep layers of darkness. She heard him say, “Give me three minutes’ start and I won’t cut your throat!”

Lilly screamed again and again. Then slowly, through the abject terror she was living, she realised that the man had gone, as silently as he came.

She pulled the bedclothes up to her chin and shuddered uncontrollably. She had gone to bed just after midnight that night – it was Christmas night in fact – with her friend Elsie, just to keep Elsie company. Now, with a start, she wondered, why hadn’t Elsie heard her screams?

There was no reply.

Still no reply. With trembling hands Lilly groped for the light switch. The bright light momentarily dazzled her. She looked sideways. Elsie was there. The pillow was still wet and warm with her blood. Her throat was cut.

The ghostly intruder had left a corpse in the bed alongside Lilly before fleeing into the night.
Hysterically, and now beyond all control, Lilly ran screaming from the house into the street. Outside she stopped a car with three men in it. “A man crawled into my bed!” she gasped. “He killed my friend. There’s a corpse in my bed!” They called the Adelaide police.

While paramedics dressed her badly bruised throat, where the intruder had gripped her, Lilly blurted out her story. “Mrs. Elsie Wheeler and I were close friends,” she said. “She had three kids, but lived apart from her husband. She asked me to spend Christmas night with her in her Hutt Street room because her daughter was on a camping trip.

“We spent Christmas Day at the home of some of Elsie’s relatives in a suburb of the city, then we had a drink with a couple of guys before returning to Hutt Street just after midnight. After that we went straight to bed.”

Gently detectives prised into her sleep-laden memory. What exactly had woken her up? Did she hear the intruder enter the bedroom?

Lilly trawled back into the dark recesses of her mind. “I remember hearing a strange gurgling sound coming from Elsie’s side of the bed.” She thought for a moment. Then: “The man said something like he’d just put a nine-inch gash in my friend’s throat. He said he would kill himself by hanging.”

The fact that she hadn’t heard the intruder enter the room suggested he might have been there already when they came in from their night out. In that case he must have been there for some time. The room was minuscule – the only place where he could have hidden was under the bed…