Serial Killer Targeted Redheads – But Did He Kill O.J.’s Ex?

Serial Killer Targeted Redheads – But Did He Kill O.J.’s Ex? 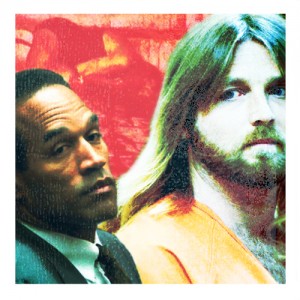 Three months after his acquittal O.J. Simpson had claimed that his wife and Ron Goldman had been slain by “The Casanova Killer” – Glen Rogers – who provided details about the crime and suggested that he had been hired by O. J. Simpson to steal a pair of diamond earrings and, if necessary, to murder Nicole. There was no doubt that Rogers was a man who could have committed such a savage murder – he had already done so…

The run-down motel in Tampa, Florida, was not the sort of place that pays too much attention to finesse or decorum. The maid servicing the ground-floor rooms that Tuesday morning in November 1995 ignored the “Do Not Disturb” sign hanging from a doorknob and inched the door open.

Straight away she wished she hadn’t. Bloodstained towels and an equally gory pair of see-through panties lay on the floor, and the bathroom door was ajar. “I could see a body in the tub,” she later told the police. “I could see a dead person.”

She ran from the room screaming, and by the time police and paramedics arrived a crowd had gathered outside the motel room and had to be pushed back. Opening the door and stepping inside, officers saw that the entire room seemed to be bathed in blood.

Curled up in a crimson pool of bathwater was the naked body of Tina Marie Cribbs, a slender, red-haired, divorced mother of two.

Blood spattered the walls, the sink and the floor. Two nine-inch stab wounds had opened her chest almost to the bone. More knife wounds scarred her buttocks, and the skin around both of her breasts had been slashed.

The man who had put out the “Do Not Disturb” sign to keep the maid away for two days was described as tall, muscular and good-looking, with long, shaggy blond hair. Detectives found fingerprints, a sports jacket and an unusual black sports watch. The killer might as well have left his signature…