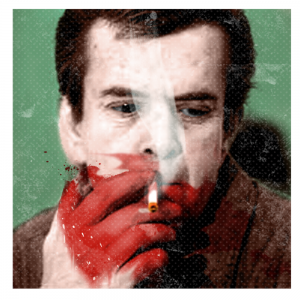 It began in 1971, when Carroll Edward Cole picked up 39-year-old Esther Buck in a San Diego bar, strangled her in his car and dumped her body beside a rural road.

Describing a murder in Oklahoma City, he told how he had woken up to find the naked, strangled body of his woman companion of the night before in bed at his side. He really fancied this victim, and after having sex with her corpse he ate some of her flesh before dismembering her. That done, he stuffed her body parts in bin-liners and dumped them in a convenient rubbish skip.

Then there was Catherine Jo Blum, 26, who he met in a bar in Las Vegas. They were walking to his car around midnight when the urge to have sex overcame him. He strangled her behind a house, and dragged her body through several back gardens to a tree at the entrance to an alley. There he stripped her and had vaginal sex with her, climaxing several times.

“I remember dragging her through the grass underneath this tree,” he said. “I took off her cowboy boots and then we did it there. She was pretty well naked, and I know she was dead.”

His wife Diana Faye, 36, who he married in Texas in 1974, was his next victim. When police broke into the couple’s one-bedroom apartment in San Diego they found her naked corpse leaning against the cupboard door. She had been dead for about a week, and Cole had vanished.

He said he went back to Las Vegas, where in November 1979 he went to a motel with 51-year-old  Marie Cushman. “We had sex in the bathtub,” he recalled. “I strangled her on the bed.”

The urge to kill overwhelmed him again a year later while he was sipping whisky in a honky-tonk bar in Dallas. This time his victim was Dorothy King, a 51-year-old spinster whose murder was the first one he described when he was arrested for the slaying of Wanda Fay Roberts.

He said he had probably murdered 35 or more women since 1971. But was he exaggerating, to get his name in the record books?

As his trial approached, he didn’t seem to care where or when it took place or whether it brought him the death sentence or confinement in an asylum or prison for the rest of his days. “I have been in and out of institutions all my life,” he said. “I know I’m sick. I just can’t help myself. I just want the killing to stop…”