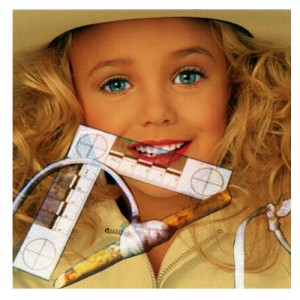 On December 26th, 1996, Patsy Ramsey called the emergency number 911 to report that her daughter JonBenét had been kidnapped from the family home in Boulder, Colorado.

Detectives arrived, read the ransom note, made a cursory search of the house and left. Several hours after the 911 call, Patsy’s husband John decided to search the basement. Curiously, this had not occurred to the detectives.

Mr. Ramsey later recalled: “As I was walking through the basement I opened the door to a side room and knew immediately I’d found her because there was a white blanket. Her eyes were closed, but yet I’d found her.”

The child had been strangled with a nylon garrotte and she had a fractured skull. Her hands were bound above her head and a primitive noose was tied around her neck. She had been sexually assaulted but the perpetrator had stopped short of full penetration. Her tiny body was rigid, and her lips were blue.

John Ramsey picked her up, carried her upstairs, and laid her under the Christmas tree, while his wife screamed for help from Jesus to raise her daughter as Lazarus had been raised from the dead.

Not surprisingly, the police were perplexed. Quietly they told reporters: “We’re not scouring the area for some mad kidnapper.”