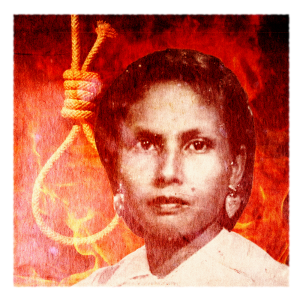 Nora Parham was furious. She had every right to be, too. Her live-in lover, a policeman named Ketchell Trapp, had just beaten her up with a stick, not for the first time that week. Now he was coming back at her, stick raised again, a mouth full of threats.

“I had a petrol iron in my hand with a pan of petrol,” Nora said. “He came into the bedroom and hit me on the head with his stick. He took aim again. I threw the petrol over him. He grabbed the petrol pan from me and as I was fleeing through the back door he hit me with the pan.

“I ran round outside and round to the front of the house, entering through the front door. I heard a noise, went to see what it was, and saw Ketchell coming out of the latrine on fire.

“I ran to help him, but there was nothing I could do, so I ran to the hospital.”

Constable Trapp was naked when he caught fire. There were severe third-degree burns to about 90 per cent of his body, on his chest, back, abdomen, genital area, legs and thighs. He died in hospital in terrible agony the next day.

And the same day Nora Parham, all four foot eight inches of her, the 39-year-old mother of eight children, was arrested and charged with Trapp’s murder. She had burned him alive, according to the charge sheet.

The accusation was extraordinary if only for the fact that the victim lived long enough to make a statement denying the charge sheet. “I gave her a couple of blows,” he said. “She was getting her iron ready to iron and she threw the petrol at me, but she didn’t light a match.”

How then did he catch fire?