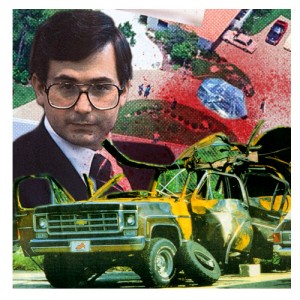 “It was the damnedest thing I ever saw in my life,” the badly-shaken witness said emotionally. “I was looking right at it when the car exploded – literally blew to bits – and I saw the bodies sailing through the air.”

The witness added that he and his partner had been on the third tee of the Quail Creek Golf and Country Club at 9.15 on Tuesday morning, July 9th, 1985. “My partner was just getting ready to drive and I was looking down the fairway. I saw this station wagon parked in the driveway – and then it blew up.”

The driveway he referred to was a circular one in front of the house on White Violet Way, at the edge of the fairway. “We dropped our clubs and ran over to see what we could do to help,” the witness said. He related that, when they reached the house, they saw the mangled bodies of a man and a woman. They had been blown out of the car and were lying on the lawn. A third person, a woman, was rolling on the grass near the smouldering hulk of the car, attempting to put out the fire that was burning her hair and clothing.

“My partner ran over to help her,” the witness said. “And just when he got there, there was another explosion. A piece of metal got him in the arm and chest. I don’t know how badly he’s hurt.”

Two greenskeepers who were working nearby came over and helped him drag his partner and the woman away from the car, in case there should be another explosion. And someone put in a call to the Collier County sheriff’s office.

When sheriff’s deputies and medics arrived, they were directed to the $600,000 ranch-style home of Margaret H. Benson, the widowed heiress to a reputed $400 million estate…