Most Wanted – The Birth of the FBI

Most Wanted – The Birth of the FBI 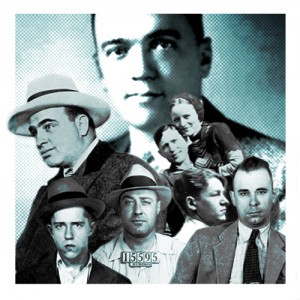 America was in turmoil. She had come triumphantly out of the First World War allied coalition into the Roaring Twenties. But on the home front a cancer of big-time crime was eating away at the moral fibre of the nation, turning politics, business and society putrid with decay.

The signs were there for all to see. In league with crooked politicians, gun-totin’ gangsters were taking over the country by stealth and strong-arm tactics, while law-abiding Americans looked on helplessly.

The gangsters’ names were already writ as large in the nation’s chronicles as their 19th century counterparts. For Billy the Kid, Jesse James, and the Sundance Kid you could now read Al Capone, Machine-Gun Kelly, John Dillinger, Baby-Face Nelson and a dozen others.

Al Capone had the lion’s share, a fortune that enabled him to laze in the Florida sunshine, smoking a fat cigar, surrounded by bodyguards and riding out in his bullet-proof car.

His bootlegging fortune was supplemented by income from protection rackets encompassing most of the traders in Chicago, the city he controlled. Most of his enemies had died violently in street shootouts, but there were plenty of other big-city gangsters who looked to Scarface, as they called him behind his back, as their role model.

Whoever took on the job of eradicating this cancerous growth on the body of America had an awesome fight on his hands. The name of the man chosen for that task in 1924 is even today synonymous with iron-fisted police work and grand-scale gang-busting. J. Edgar Hoover was just 29 years old when he was called into the office of the American Attorney General, Harlan Stone, and told: “You’re to be acting director of the Bureau of Investigation.”

With those words America declared war on the underworld.