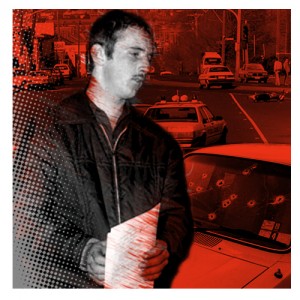 Julian Knight knew what he had to do. He rushed home and assembled his collection of guns – the lethal M14 semi-automatic carbine, a .22-calibre Ruger pistol that would take your insides away, and a pump-action Mossberg shotgun. Well-prepared for any form of action, he gathered all the ammo that he had. He extracted one round – his suicide bullet – stuffing it into a narrow pocket in his jeans.

With a firearm in each hand and one strapped across his shoulders, he ran out of his mother’s home and turned west towards Hoddle Street. The ammunition belts jangled as he ran and he was conscious of the combat knife he had stuffed in the back of his jeans. Now he was having fun – now he would show them, he would show them all.

As soon as he reached Hoddle Street he began to fire on passing cars with the almost silent Ruger. Knight was firing 10 rounds at each car in a rapid burst from his Ruger, having to reload between each volley.

After shooting at around half a dozen cars, he ran out of ammunition for the Ruger and switched to the Mossberg. It was much louder than the Ruger, and when the boom of the first shots was heard the police were alerted.

Knight’s mother had heard the shots from her home. Told that he had left with his guns, she rang the police. “I can’t think of any reason for him to do these things,” she cried. “Because of his tendency to keep things to himself he may have had something on his mind which he didn’t discuss with me, but otherwise I can’t account for his actions…”