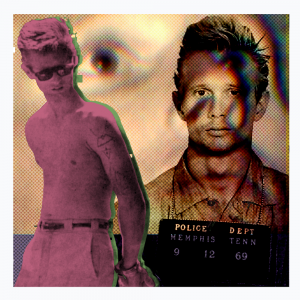 Roy Dumas, 58, shuffled to the door to answer the call. He was a Second World War soldier disabled by a mortar blast. Now in failing health and weighing hardly more than seven stone as a result of his wounds, it took him some time to turn the key to lift the latch.

As the door opened the young man pushed his way through it, shoving the feeble Dumas back into the living-room.

“I want some money,” he rasped.

Surprised and frightened, the skeletal Dumas said, “I don’t have any money.”

The intruder grabbed his arm and, pushing him into a bedroom, threw him down on one of the twin beds. Rummaging through a clothes drawer he selected a pair of suspenders and some tights, with which he bound his victim’s hands and feet and gagged him.

Then he turned Dumas over and found his wallet in a back pocket, containing seven dollars. Rummaging again through the other drawers, he found a hunting knife, which he stuck in his belt. From the drawers of another bedroom in the apartment the intruder snatched five dollars.

Dumas, working himself free of the gag, began to scream. The intruder, who in the meantime had put on a mask, ran back into the bedroom and beat the sick man with his fists. “Where’s the money?’ he yelled. “I want some money!”

“She’s on her way home from work.”

The man’s mind worked furiously. Tightening the bonds of his victim, he went into another room and hid in a cupboard, waiting.

At that moment, her shopping completed, 46-year-old Mrs. Bernalyn Dumas, a nursing supervisor at the local hospital, was on her way home to the Hermitage building. She entered and went through the living-room to her bedroom. Then the man sprang from the cupboard and forced her back on to the bed.

Working fast, he tied her hands to the bedhead, gagged her, then ripped open her clothes. Selecting a pair of surgical scissors he found in a drawer, he attacked her.

If Bernalyn Dumas’s agonised screams carried faintly beyond the apartment walls out into the grounds, they failed to register on the few people going about their mid-afternoon business.

Apparently tiring of his gruesome work, the burglar went through her handbag and took out 20 dollars. He searched the apartment again, but he wanted only money and he already had it all.

Then he went back to the bed where Mrs. Dumas lay, put a pair of tights around her neck and pulled hard. She struggled briefly, then went still. Before he left her dead or dying on the bed, the burglar raised her knees and pulled her legs apart, exposing the lower half of her body

Picking up another pair of tights the intruder threw his mask on to the floor and went into the other bedroom, where Roy Dumas lay in a state of stark terror. He knotted the ligature around his second victim’s throat and pulled hard. Roy Dumas died in the manner of his wife, strangled.

With $32 in his pocket the killer let himself out of the front door and strolled unnoticed to his car, parked behind the apartment block.

Unnoticed, too, the couple lay dead in separate rooms for the rest of that day, August 14th, 1969. The sun had passed its zenith on that brilliantly hot day of that brilliantly hot summer, and now, its heat spent, it dropped again, and the lengthening evening shadows cut dark shapes across the grounds of the apartment block…