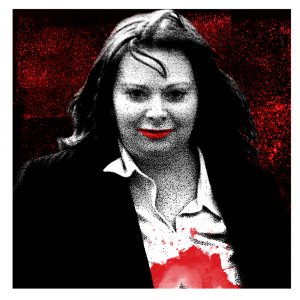 Michelle Burgess and just-released petty criminal, drug-addict and would-be assassin, David Key pulled up outside Carolyn Matthews’ home at Nambucca Avenue, a block behind Adelaide’s beach, at 5.45 p.m. Key did a U-turn in the Corolla and braked.

“They got out of the car and walked towards Carolyn as she came out of the front door with some recycling,” said author Derek Pedley. “Key asked her, ‘Are you Carolyn Matthews?’ and showed her the murder contract. He pointed to the picture and said, ‘Is this you?’ How bizarre is that?”

“Michelle strikes Carolyn across the face and pushes her back into her house. They back Carolyn into her tiny kitchen, all the while arguing about whether or not to kill her. You can only imagine Carolyn Matthews’ absolute terror at this point. This angry drug-crazed man is screaming at this woman in front of him, and that’s when the Wiltshire knife comes out of the kitchen.”

David Key picked up the story in his police interview. “Michelle handed me a knife and said, ‘Right now, kill her.’ I said, ‘You do it.’ She said, ‘No, you do it if you want to be with me. You prove to me how much you love me. Kill her.’”

So he did, stabbing Carolyn seven times in the chest.

“Please, no,” Carolyn begged. But it was over in seconds – a life vacated.

For a moment, the constant buzz in Key’s ears, the constant rush of blood through his veins, stopped. He experienced an unwelcome second of pristine clarity. “I’m thinking to myself, what have you just done, you idiot?”