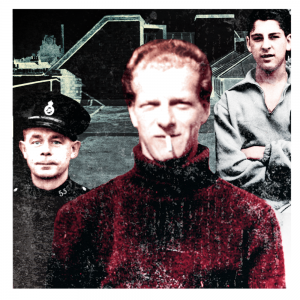 Soon after reaching the roof they realised that they had been spotted. Someone shone a torch below and they heard voices.

They took refuge behind the stack of the lift-shaft.

In quick succession a police van and a police car pulled in to the kerb outside the warehouse. Leading the five uniformed officers was Detective Constable Frederick Fairfax, in plain clothes.

He later told how, after climbing a drainpipe to the roof, he sensed the burglars’ presence behind the lift-house. Making his way carefully between the raised roof-lights, he shouted: “I’m a police officer! Come out from behind that stack!”

Fairfax rushed the lift-house and grabbed Bentley, the first person he saw, dragging him away across the roof. Then, still hanging on to his prisoner, he tried to close in on Craig, but Bentley broke free and, according to Fairfax, cried: “Let him have it, Chris!”