Killing That Sparked A Carnival

Killing That Sparked A Carnival 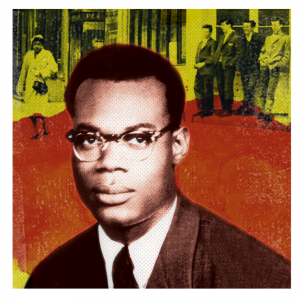 Mrs. Joy Okine was looking out of the upstairs window of her house on the edge of the Notting Hill district when a six-foot-tall black man came round the corner into Southam Street below her.

Mrs. Okine, 21, recognised him, even from a distance, under the light of the street lamps. He was Kelso Cochrane. A quiet, happy young fellow, with a tremendous work ethic. His left thumb, broken in his carpentry work, was in plaster. In a street where everyone knew everyone, Joy Okine knew Kelso had just been to hospital to have his injury dressed and get some painkillers.

Suddenly a gang of white youths lounging against a derelict shop window surged across the pavement in front of the black man. This was 1959, and their flashy Edwardian-style attire marked them out unmistakeably as Teddy Boys. They barred the way to Kelso.

They shouted the sort of insult that had sparked off a wave of racial riots the previous year, and still sparked sporadic fights between blacks and whites in the Notting Hill area.

Then they attacked Kelso. One of them tried to wrench out an iron railing to use as a weapon, but failed. Instead, a stiletto flashed.

Kelso bravely faced up to them. But with his left hand unusable, he hadn’t a chance. In the space of a couple of minutes the one-sided battle – there were six of the Teddy Boys against the one black lad – was over.

Kelso, a deep wound in his chest, fell to the pavement. As the white youths, some only 15 years old, scuttled away, he staggered up. Two West Indians arrived on the scene and helped him. They picked him up and took him in a taxi to St. Charles’s Hospital, where he died.

Joy Okine, who was married to a black man from Ghana, turned away from her window. “I didn’t look after he was attacked,” she said. “I mind my own business around here…”