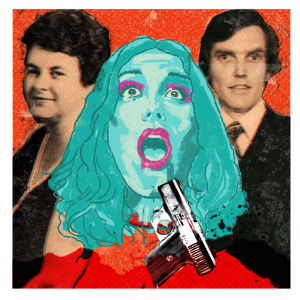 During the summer of 1980, Sunset Boulevard – the street stretching from Los Angeles to the Pacific Coast Highway, normally associated with the glamour of Hollywood – was the playground of Douglas Daniel Clark. It was here that he selected his playthings, where he found what he lusted after the most. His preference was oral sex  – and along Sunset Boulevard it was easy to come by.

The 34-year-old young-faced boilermaker butchered and abused creatures of the Boulevard – callow young runaways, black and white, all willing to spend a few minutes with him in the front seat of his car for the $30 or $40 they’d set as the price for their favours.

Clark’s partner in this bizarre lifestyle was a plump, middle-aged nurse by the name of Carol Bundy, three years his senior. They lived together during that summer of 1980. But theirs was no grand romance. It was gross evil. And they were arrested two days apart, for similar types of crime – he for murdering and decapitating girls, she for hacking off the head of a boyfriend.

She told the police after her arrest: “It’s fun to kill someone.”

She also claimed she was dominated by Clark who was “extremely good in bed.” But he didn’t want to bed Carol; he preferred to romp with the skinny young streetwalkers and so Carol helped him find his victims.

The police may never know how many women Clark actually killed but, for the most part, they all died the same way. He paid them to have oral sex with him in his car, then shot them in the head with a small-calibre weapon as he reached his sexual climax.

Next, he would strip off their underwear, save it as a trophy, and have sex with their dead bodies. And therein lay the motive for his crime – necrophilia…

Read the full report in Murder Most Foul No. 116 »