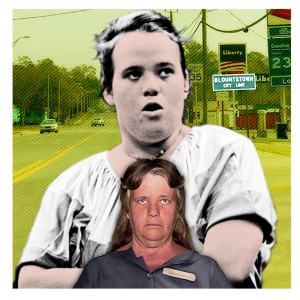 On January 4th, 1982, 77-year-old Wilburn Swindle had been found lying face-down on his living-room floor in the town of Perry. And, said Deputy Hugh Poppell, of Taylor County sheriff’s office, “His pants pockets had been pulled wrong side out.” According to local gossip, Wilburn Swindle had a lot of money lying around – and apparently the killer had believed these stories, for the ground all around the house had been dug up. And even some of the ground under it.

Christine Falling had been hired by Wilburn Swindle the day before he was killed, and there was no record of her being released by him, or of her notifying him, or anyone else, that she was leaving.

She was not the one to discover his body the day after she was hired to care for him. He had died of suffocation from pressure applied to the neck area. It was just sufficient and controlled enough to subdue and kill him, without using the excessive force needed to break neck structures beneath the flesh.

In the light of this mounting evidence, the confession by Christine Falling became more significant. And there was no longer much room to doubt the truth of her following taped confessions:

* Cassidy “Muffin” Marie Johnson: “She got kind of rowdy or something. Anyway, I choked her until she quit breathing and she turned purple.”

* Jeffrey Michael Davis: “He got hold of some kind of spray, white-looking paint or something. He made me mad. I was already kind of mad that morning. I just took it out on him. I started choking him until he was dead.”

* Joseph “Joe Boy” Spring: “He laid down for a nap and was asleep – and, I don’t know, I just got the urge and wanted to kill him. So I went and choked him to death. Then I called the ambulance.”

* Travis DeWayne Coleman: “I just choked him. No apparent reason, I guess. I just pulled him off his pallet and choked him to death and laid him back down.”

When Sheriff Smith asked why she killed the children, Christine wept softly and replied: “I don’t know! I don’t know why I did none of this!”