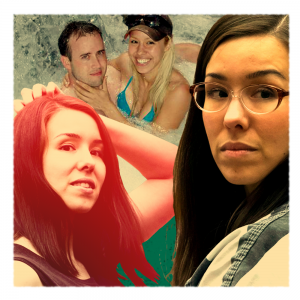 Jodi’s boyfriend wanted her to dress up as Little Red Riding Hood for a sex session. But when he got tired of her she flew into a jealous rage and shot him, stabbed him and slit his throat…

They met for the first time at a conference in Las Vegas in September 2006. He was an extrovert, a motivational speaker and a Mormon. She was a sales girl from California, and a Catholic. Their religious divide presented her with no problem. “I’ll give up coffee and get baptised into your Church,” she told him.

They quarrelled, broke up, came back together again, carried on vigorously where they had left off, and then broke up again.

It lasted 15 months. By December 2007 he was dating another girl. That’s when Jodi slashed his tyres twice – and sent threatening emails to his new squeeze too.

Four months later Jodi, a former waitress, gave up the unequal struggle and moved back to California. Travis breathed a sigh of relief. “This year will be the best year of my life,” he wrote.

But Jodi couldn’t forget him. She hacked into his Facebook account, causing him to yell at her: “Stay out of my life forever!”

Three days after that, on June 4th, 2008, she visited him in Arizona. Within minutes they were having sex again, violent, passionate lovemaking just like the old times. They even took pictures of themselves in the nude to celebrate the event.

Then came the inevitable quarrel, and this time it went ballistic. He was in the shower, and she would claim he lunged at her. She had to protect herself.

It would be said later that she made a pretty good job of it, stabbing him 27 times, shooting him through the head and then slitting his throat from ear to ear…

Read the full report in Murder Most Foul No. 121 »