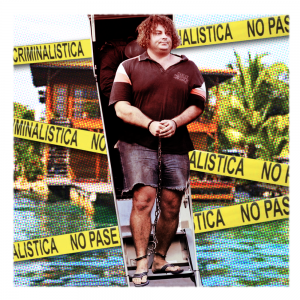 After fleeing to Panama with his girlfriend Laura Reese to escape US justice, ruthless William Holbert hatched a deadly plan to achieve the luxury lifestyle enjoyed by the country’s most affluent expats. After killing five he had managed it – but then the authorities caught up with him…

They were extradited back to Panama City in handcuffs.

Laura Reese was trembling and mute as she stepped off the light aircraft, but Holbert strode down the steps, head held high, waving and smiling like a celebrity. It was a stance that bewildered the authorities – especially when he sat down minutes later with Panamanian prosecutor Angel Calderon and confessed everything with hardly a moment’s hesitation.

“He told me he was a fan of Hitler and Tony Soprano because for him it is all about power, respect and being loved by your people. He believed he’d put this country on the map and said: ‘In the US they see me as some kind of sick serial killer, but here I’m a rock star who kills gringos. The Panama police may not love me, but the people of Panama do.’

Calderon continued: “He’s a master con-man, so I think he knew the game was up when he was brought back to Panama. He made no attempt at excuses or blaming other people, or that it was a big mistake.

“He’s a sick narcissist of the highest order. He has no trouble confessing to his crimes. He seems almost proud of them. Said he didn’t need a lawyer.

“He readily told us how many people he’d killed, why he’d killed them, how he killed them, and where they were buried. But he was insistent Laura Reese knew nothing about his crimes…”