“I Wanted To Watch Him Die”

“I Wanted To Watch Him Die” 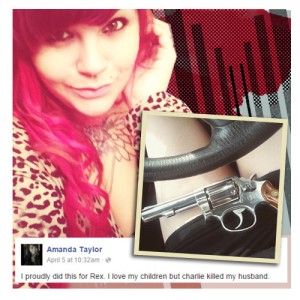 Amanda Taylor checked her watch. It was 3.27 p.m., the perfect time to kill her father-in-law.

She thrust her knife into his back as he lay face-down on the couch in his Akron, Ohio, home. Then she did it again and again – 31 times in all. That done, she took a selfie showing her with his body.

Charles Taylor, 59, had taken a lot longer to die than she expected. It was April 4th, 2015, and the time 3.27 had a special significance for 24-year-old Amanda. She and her late husband Rex shared March 27th as their birthday – 3/27, American calendar style.

After Charles Taylor was dead, she walked back to the car parked outside his home. Drugs had destroyed her life, she would later say, and he was responsible. Rex had been introduced to drugs by his father at the age of 15, she would claim. The two partied together more like brothers than father and son.

She had loved Rex, bearing him two children, but his drug addiction had worsened, so she had left him. “I didn’t want him using drugs in front of the kids,” she said.

Rex had loved her, too. Devastated when she left, he hung himself in his father’s tool shed on his son’s seventh birthday.

In the car, Sean Ball, 32, sat awaiting Amanda. He’d been a good friend who’d do anything for her, although they’d never been in a relationship. He’d loaned her his new, bayonet-shaped knife so she could kill Charles Taylor. It had cost him $100, and he’d also taken along two guns from his parents’ home in case she needed them. Together, they went on the run, heading for Kentucky and Tennessee before turning back east towards North Carolina. They used the money from Charles Taylor’s wallet to buy fuel.

His body was found by a neighbour at 9.30 p.m. when she called with medicine for his ailing father, who lived in a bedroom upstairs. She alerted the police, and a multi-state manhunt was launched.

Meanwhile, Amanda fell out with Sean. She blasted him in the face with one of the guns, and he was found lying beside the Blue Ridge Parkway in North Carolina…