How Sex in Prison Led To “Shawshank” Killers’ Escape

How Sex in Prison Led To “Shawshank” Killers’ Escape 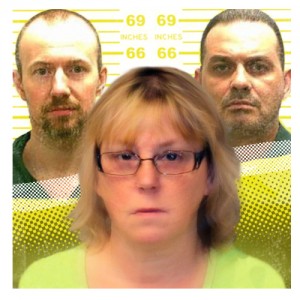 The two convicts, both of them doing life for brutal murders, winked knowingly at the prison’s sewing instructor, Joyce Mitchell. “We’re going to do a breakout,” they said. “We need your help to get some tools.”

Richard Matt and David Sweat had been softening up Joyce for some time. Her job was to teach convicts how to use sewing machines. Now 51-year-old Joyce, married with a family, was herself learning something that wasn’t on the prison curriculum.

Despite his viciousness, Richard Matt possessed a certain cunning charm, especially on the rare occasions in prison when there were women around. He had worked his powers of persuasion on Joyce Mitchell and befriended her. In turn, she had kissed him and performed oral sex on him, which was a rare experience for a lifer.

One of the wonders of it all was how Joyce ever fell under the charms of hard-staring Richard Matt, who was an easy man to dislike. He had earned his life sentence for killing and dismembering his former boss with a hacksaw. In 1997 he kidnapped 76-year-old William Rickerson, his former employer, and beat him savagely before driving him around in the boot of his car for 72 hours. Then he snapped his victim’s neck with his bare hands and chopped his body into pieces before throwing it into the Niagara River.

Joyce liked both men, she confessed. They were “nice” to her, she would later say. She was never in a sexual relationship with David Sweat, but she passed him notes of “a sexual nature,” that included photos of herself in the nude.

Now her two cons wanted her to fetch tools to help them escape, and to be their getaway driver. She listened to their plan, which included a detail like killing her husband, with incredulity and enthusiasm, imagining a whole new life appearing from over the horizon. And for Joyce it was game on.

After they had busted out, they told her, she would wait at the exit point in her car. They would then drive to her home and kill her husband Lyle – “The Glitch,” they called him – and that done they would flee with her across the border to safety in Mexico…