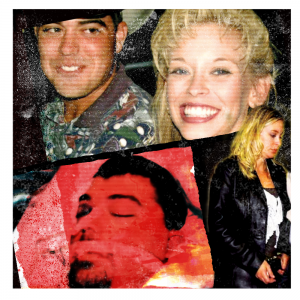 At about five o’clock on the morning of November 9th, Darlene unlocked the gun cabinet in their living-room, and carried all the weapons out onto the front lawn where she laid them neatly in a row.

She kept behind the .22 pistol Keith’s father had given him on his 21st birthday, and crept back upstairs with it. Softly opening Keith’s bedroom door, she found him asleep with his back towards her, and shot him through the head behind his left ear.

While blood from her husband’s wound soaked the pillow and pink foam oozed from his mouth, she went downstairs and pulled off the surgical latex glove she had used to hold the gun, stuffed the .22 shell casing inside it, and threw it in the kitchen rubbish bin so it was covered by half-eaten hamburgers and ice cream wrappers.

It was about six o’clock when she called 911 and told the emergency services that an intruder had shot her husband, stolen his guns, and left the back door open.

From the moment she made the call, police suspected her involvement in Keith’s death. Jeanne Kelly, the communications supervisor who spoke to her first, said: “Normally I have to calm emergency callers so I can get basic information from them, even those who have experienced far less traumatic events than a loved one suffering a critical gunshot wound. But she was just very, very calm. She told me her husband’s guns were missing before she got round to telling me he was bleeding from the head in bed.”

The first officer to arrive at the scene was Sergeant Pat Carey, and he too felt something was seriously wrong with her account.

“She took me to see her husband, who was still breathing in a strained, rasping, gurgling sort of way. I was surprised to discover that Darlene was a registered nurse who worked at a gastroenterology clinic because she had made no effort at all to assist him. We interviewed her for about an hour and she didn’t ask once how he was.

“Later, I drove her to the hospital because she needed to make some difficult medical decisions about life support, and she was very calm. She didn’t seem worried about the boys. They were with their grandparents, but they were only babies and they’d been across the landing when their dad was shot.”