Household Wiped Out In Night Of Horror

Household Wiped Out In Night Of Horror 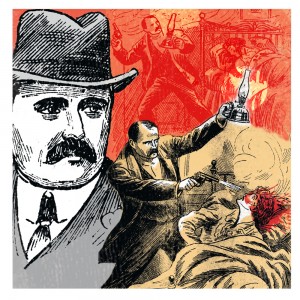 At some point during the night, probably between 4 and 5 o’clock in the morning, Holmes got up from his wife’s side and dressed himself.

He went into the bathroom and with Florence slumbering only a few feet away he loaded six bullets into his Webley pistol.

Holmes was physically capable of handling the weapon, but he was now a deranged man. He went back into the bedroom and shot Florence twice, in the right forehead and in the right shoulder blade. One bullet entered her brain, the other her heart. She was unaware of his stealthy approach and died instantly.

Her husband straightened the bedclothes a bit, replaced a pillow, and closed the bedroom door gently behind him.

Next he crossed the landing to the bedroom of his daughter Winifred where she too was asleep. Approaching quietly, he shot her under the right eye and she too died without waking. He closed the bedroom door as he left, like a solicitous Edwardian patriarch doing the rounds of the house, and then went upstairs to the attic, where the two servants shared the same small room, sleeping in separate beds.

Neither woke up when Holmes went into the room. Twenty-three-year-old Lizzie Hayes, who loved her job and cooked whatever dinner her master had been able to eat the evening before, was lying on her right side as Holmes walked across the room. He shot her in the left temple and she died at once.

Then he turned to the 17-year-old, Ethel Morris, who had been working for the family for only a few weeks. He fired a bullet into her head just below her left ear. She was the only one of his victims who appeared to have struggled after the shot slammed into her head, although the inquest was later told that this might have been due to “convulsive movements” taking place after death.

Holmes now retraced his steps to his and his dead wife’s bedroom, where, standing at the dressing table, he ejected the spent cartridges and reloaded the pistol. Then, leaving the four bodies behind, he went downstairs in the darkened house and walked outside into the brisk, early morning air.

The birds were singing and the sun was beginning to come up. But there was no room for rejoicing. Fawley was now one of the dark places on Earth – Holmes had made it so.