He Packed His Dead Family In A Trunk

He Packed His Dead Family In A Trunk 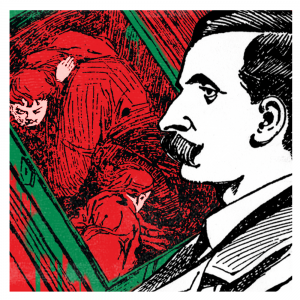 Arthur Devereux knew a lot about chemistry – dispensing medicines was his job. He knew less, however, about the chemistry of love, and when he applied his pharmaceutical knowledge to his marriage, the result was disastrous…

His wife Beatrice soon began to discover for herself the hardship of wedlock on a shoe-string, as Arthur’s confidence about his future faded, and he found himself at his wits’ end struggling to provide enough money to keep a roof over the heads of his family of five – as he later told the Old Bailey…

“One morning, just before I left, she told me that she could endure poverty no longer. ‘I will kill the twins and myself,’ were her exact words. ‘I’d rather see them dead than starving.’

“I rebuked her for her evil thoughts, but of course I never imagined for a moment that she had any intention of carrying out her threat. Up to that time she had not struck me as being likely to take her own life.

“That night I came home at half-past ten, worn out, and I let myself in with my latchkey. Not a sound could I hear, but I was not surprised, as I thought everybody was in bed. But the moment I entered the bedroom and saw Mrs. Devereux lying dead with the twins beside her, I realised that she had carried out her threat.

“Imagine my terrible position. My wife had poisoned the twins with morphine belonging to me and had then committed suicide by the same means. I was a chemist’s assistant and in a position to obtain poison. No one would believe that I was not the murderer. Public opinion would convict me of the treble crime. I lost my head and raved, but after a bit I came to the conclusion that the only thing for me to do was to hush up the whole affair. Accordingly, I bought the trunk and placed the bodies in it. But I am not a murderer.”