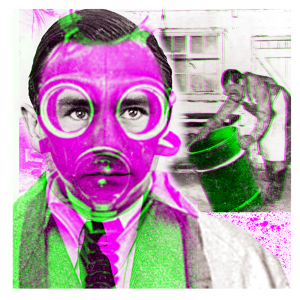 Mrs. Olive Henrietta Helen Olivia Durand-Deacon, 69, a plump, wealthy widow, had occupied room 115 at the Onslow Court Hotel, Queen’s Gate, Kensington, for some six years. Sharing that same London hotel was John George Haigh, who had occupied room 404 for almost five years. He was 39, well-spoken, with a neat moustache. A small, fastidious man with twinkling eyes, he appeared to be a gentleman of impeccable breeding, so none of the other residents cared to probe as to his source of income or single status.

On Monday February 14th, 1949, the lady was dining at the hotel with her friend, Mrs. Birkin, who was assistant secretary to the Francis Bacon Society.

Mrs. Durand-Deacon leaned over to Haigh’s table and showed him some plastic false fingernails, suggesting that it might be profitable to manufacture them.

Haigh was instantly interested, since the suggestion gave him the opportunity of getting Mrs. Durand-Deacon to visit a storeroom he had the use of at Leopold Road, Crawley, where he could dispose of her without fear of being disturbed.

Haigh made careful arrangements for murder. On Tuesday he had carboys of sulphuric acid delivered to the Crawley premises. He also borrowed £50 from his friend, Mr. Jones, the owner of Hurstlea Products who had given him unlimited use of the Leopold Road store-room. Haigh promised Jones he would have his money back at the weekend, in the certain knowledge he would be able to keep his promise.

With that £50, Haigh was able to pay his hotel bill. The book-keeper had been pestering him for some time about it, and the outstanding sum was beginning to embarrass him.

On Thursday, he bought a new stirrup-pump for pumping acid from the narrow neck of the carboy into a 40-gallon steel drum.

On Friday, February 18th, Haigh offered to drive Mrs. Durand-Deacon to his Crawley “factory” to see for herself what progress he had made with the false fingernails. She did not know that the hat-box on the back seat of Haigh’s Alvis contained a .38 Enfield revolver and ammunition.

Once he’d got her inside the store-room, Haigh shot Mrs. Durand-Deacon in the back of her head. He plugged the wound with cotton-wool to prevent the blood from getting everywhere, then stripped her of her Persian lamb coat and jewellery. Then he heaved her into the 40-gallon drum of sulphuric acid.

On the way home, Haigh pawned a diamond wristwatch for £10 and deposited the rest of the jewellery at a Horsham jeweller’s for evaluation. Then he called in at the Ancient Prior’s Cafe in Crawley, where he ate egg on toast with all the relish of a man who has earned it…