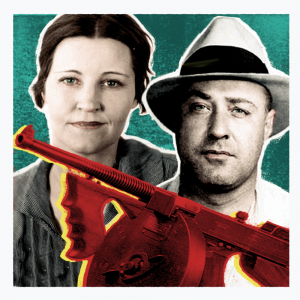 Kathryn “Kit” Kelly scoured the newspapers’ society pages in search of another wealthy victim. She settled on Charles Urschel, recently married to Berenice Slick, the widow of an oil magnate. Their marriage had made them the wealthiest couple in Oklahoma City.

Under Kathryn’s instructions her husband – George “Machine Gun” Kelly – and Bates crept into the luxurious Urschel mansion on the evening of July 22nd, 1933, and confronted two couples who were playing cards on a screened-off sun-porch.

“Stick em up!” growled Kelly from behind his machine gun. “We want Urschel and we mean business. Don’t bat an eye or I’ll blow your heads off!”

Neither man spoke up, so both were forced into the back of the kidnappers’ car and driven off. Some miles away, both men were searched and Urschel was identified. His companion was robbed and then released.

The kidnapped Urschel was blindfolded, chained and driven on a roundabout route to Kathryn’s parents’ ranch near Paradise, Texas. There he was confined in a filthy room while his captors negotiated with his family.

It was Kathryn who allegedly wrote the ransom notes, calmly setting down her colossal demand:

“Immediately upon receipt of this letter you will proceed to obtain the sum of $200,000 in genuine, used Federal Reserve currency.”

With added menace she warned against the family going to the authorities:

“Remember this: If any trickery is attempted you will find the remains of Urschel and instead of joy there will be double grief – for someone very near and dear to the Urschel family is under constant surveillance and will likewise suffer for your error.”

The staggering amount was duly paid – handed over to Machine-Gun Kelly on a busy Kansas City boulevard in broad daylight. No attempt was made to trap the gangster; the Urschel family were only interested in the safe return of the kidnapped man.

The kidnappers raced hundreds of miles back to the Shannon farm to split the ransom, with Kelly and Kathryn taking the lion’s share. Bates and Kelly each gave Harvey Bailey, who had turned up at the ranch to recover from a leg wound he suffered during a prison break, $500 to settle an old debt. They also paid Boss Shannon for rent and guard duties. With the money matters settled, they turned to what to do with Urschel.

Kelly and Bates insisted on sticking to their ransom note promise to release the oilman. If not it would spoil it for further rich guy kidnappings.

“Like hell you will, screamed Kathryn. “Kill the bastard! Then we won’t have any more trouble with him.”