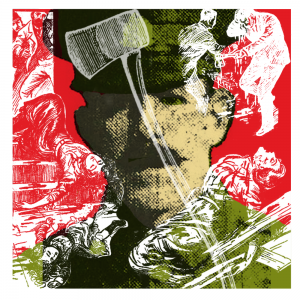 The Cornish family lived in Stukeley Road in the West Ham area of Forest Gate. It was a solid, lower-middle-class neighbourhood, a short distance from Upton Park, at that time the home of West Ham United football club.

“Come into the house and have a cup of tea,” Alice Cornish said. “You are a rum one, if ever there was. All that time you spent in prison and never said a word to any of us about it.”

Inside the house she continued a disapproving monologue about Henry Perry’s past life. “It won’t do, that sort of thing, now the war’s over. You must mend your ways, get a proper job, look after your wife.” For a minute or two more she harangued him and then, apparently deciding that was enough, she said, “You’d better stay and have some dinner.”

They went into the kitchen and Perry sat in a chair at the table. As Alice turned to prepare the meal Perry rose from his chair, picked up a poker, and brought it down on her head, knocking her off her feet.

Alice’s shout of pain brought her 14-year-old daughter, also called Alice, running into the kitchen. Perry hit her over the head with an axe that was kept by the fireplace, and then cut her throat. Turning back to her mother, he cut her throat and then cut off her ring finger, removing her wedding ring.

Who else was in the house, he wondered? He remembered the second Cornish daughter, six-year-old Marie. Taking the axe with him he found her on the stairs, wide-eyed with terror. He brought the axe down on her head, smashing her skull.

Perry knew that Alice Cornish’s husband, Walter, 48, a builder and painter and decorator, would soon be home for his meal. He gathered up the body of Mrs. Cornish and took it out to the garden shed. He carried the body of Alice, the daughter, to the cellar steps, closing the door behind her, and left the body of Marie on the staircase inside the house.

Now, transposed into a five-foot monster killer, and clearly completely out of his mind, he decided to wait for the luckless Walter…