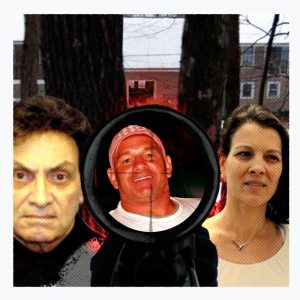 Frank Spencer was a popular businessman with an unusual belief. He was convinced that he was going to die, and soon. What’s more, he was equally convinced about who would kill him, and he rarely missed a chance to tell anyone willing to listen.

On Sunday, July 1st, 2012, a typical sunny summer’s day in Harrisburg, Pennsylvania, Frank’s body was found in his home, shot twice. Once by a rifle from a distance, once close up by a hand gun.

“When he didn’t answer my calls that day,” recalled Joe Yoddock, an old friend from school, “I recall thinking I hope he’s not dead. All his friends knew what he’d been through domestically, and when I saw his truck was missing and no one answering the door, my heart sank.” So Joe had gone round to check that everything was all right.

“I let myself in,” Joe said, “and there he was, lying inside the front door. He looked at peace and there was dried blood congealed inside his ear.”

Joe wasn’t the only person who wasn’t really surprised at what he’d found. “Everyone in Bloomsburg knew Frank, and he was well loved,” Joe added. “With one obvious exception. That was his ex-wife, Maria, from whom he’d only been officially divorced three weeks before.”

Maria Sanutti Spencer had eloped with Frank in 1997. He was besotted with her passion for life and her crazy streak, and they soon had two children. Frank’s scrapyard business was doing well and he doted on his kids. At first, Maria was the perfect wife and mother. She was smart, having earned a law degree in Georgia, with a high enough grade to practise at the state bar. And she was a true soccer mom, organising matches for Frankie’s team, posting recipes for fruity ice-pops on her Facebook page, and she was even invited to run for election as a school governor.

But there was a dark shadow in Maria’s life. Her father was Rocco Franklin, a man suspected to be a hit-man for the mob. He had recently been released after serving five years behind bars for weapons offences and fraud. While serving his time, he had changed his name to Sanutti.

Maria had inherited her father’s temper and determination to get her way. As the years passed, her marriage to Frank began to crumble, and Frank filed for divorce in 2008. Later that year, Maria was arrested after a fight with her mother-in-law at her son’s school. She pleaded guilty to disorderly conduct, harassment and child endangerment and she was given a $600 fine.

Her conviction only fuelled her rage against Frank. She repeatedly threatened to kill him, sometimes in front of witnesses, and although he often reported the threats to the local police, they did very little about them…