Escape To The Death House

Escape To The Death House 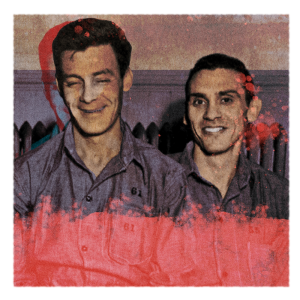 A maze of headlights outlined the Weatherup driveway. Springfield police were there, waiting for orders. Their chief, Sherman Martin, was already conferring with Corporal Potter. Nesky and Cioffi were sent up the driveway of an estate directly behind the Weatherup home.

Mrs. Weatherup, a 54-year-old former schoolteacher, had been taken to the hospital along with her husband five minutes before we arrived. A Springfield police officer cursed the vanished assailants. He muttered: “They really did a job on that poor woman. Must have hit her with a pipe or a club. Her head was hanging over the bathtub. It was battered – blood streaming all over.”

By now it was 1.15. I walked over to the white house with green shutters. The front kitchen door was open. Four bloody fingermarks, which trailed to the corner of the house, spelled the first sign of violence. A large pool of blood stood out sharply on the green linoleum. Broken glass was scattered all over the kitchen floor from the back door, through which the escaped convicts had entered.

Scattered milk bottles, plus an overturned, blood-spattered chair, testified to the struggle Mr. Weatherup had put up before being knocked to the floor by his two assailants…