Did The Wrong Man Fry For The Death of Hero’s Baby?

Did The Wrong Man Fry For The Death of Hero’s Baby? 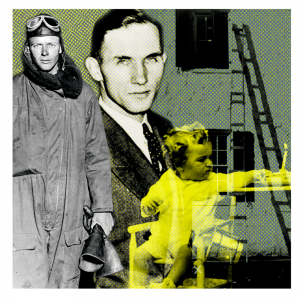 On the evening of March 1st, 1932, the couple were at their estate near Hopewell, in the Sourland Mountains of Hunterdon County, New Jersey. Their 19-month-old son, Charles Jr., was asleep in his crib in a first-floor bedroom. There were three other persons in the house: Betty Gow, the baby’s nurse; Ollie Whatley, the butler; and his wife, Elsie, the cook. At 9 p.m. these three were in the servants’ quarters.

Anne Lindbergh went upstairs, looked into the nursery, saw that the baby was sleeping quietly and came downstairs again. Lindbergh was doing some writing in his study on the ground floor. At 9.50 p.m., Betty Gow went up to see whether the child was all right.

She found the crib empty. She supposed that one of the baby’s parents had taken him, but decided to make sure. She went downstairs and saw that the baby was not with its mother. She entered the study and saw Lindbergh sitting there alone.

“Where’s the baby?” she asked.

Lindbergh looked up. “What do you mean?”

Lindbergh ran up the stairs and turned on a light in the nursery.

The crib was indeed empty. He then noticed a white envelope on the window-sill. It bore his name, in unfamiliar handwriting, and he realised straightway that his son had been kidnapped.

The others in the household, attracted by the commotion, now came running into the room.

Lindbergh grabbed a loaded hunting rifle and a torch and ran outside. He saw a wooden ladder of home-made construction under the nursery window. He paused to listen, but could hear no sound. He ran to a high point on the estate. But it was a dark night and he could see no farther than the beam of his torch. Dazed and incredulous, he ran back into the house.

“That envelope must be from the kidnappers,” his wife said. “Let’s open it. It may tell us something important.”

“No, we must wait till the police come,” Lindbergh said firmly. “It may contain fingerprints…”