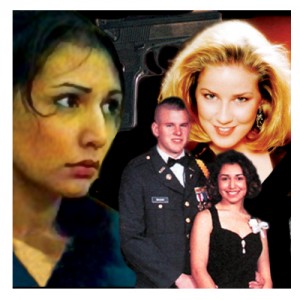 According to the prosecutor, shortly after midnight 16-year-old Adrianne sneaked out of her home while her parents were asleep. David Graham picked her up in Diane Zamora’s hatchback car.

With Adrianne and Graham in the front and Diane hidden in the back, they drove to a secluded area near the lake and parked. Adrianne started undressing.

Before the first button was undone Diane jumped up like an unleashed spring and lashed out at Adrianne for seducing her fiancé. The two girls began pulling each other’s hair and screaming curses with David in the middle. Diane slammed a barbell over the younger girl’s head. Blood gushed.

The prosecutor played an excerpt from Graham’s taped confession: “Adrianne somehow crawled through the window and, to our horror, ran off. She ran into a nearby field and collapsed. I knew I couldn’t leave the key witness to our crime alive.”

He said he chased Adrianne, stood over her, and shot her in the face. Back in the hatchback, he and Diane embraced.

“The first thing out of our mouths was ‘love you,’ followed by Diane’s ‘We shouldn’t have done that, David.’ I thought, ‘Nice time to tell me that…’”

Read the full report in Murder Most Foul No. 101 »