Deadly Sniper In The Texas Tower

Deadly Sniper In The Texas Tower 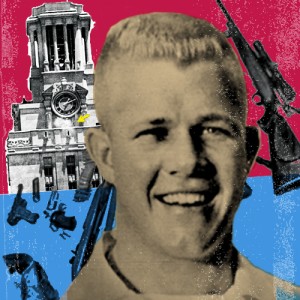 Charles Whitman selects his bolt-action .35 Remington rifle with the telescopic sights and puts his head over the parapet to look for targets.

His first bullet rips through the leg of a 17-year-old paperboy cycling round the campus delivering newspapers. Then he hits an 18-year-old anthropology student in the abdomen. She’s eight months pregnant and the shot kills her unborn child. As her fiancé reaches out to help her, Whitman kills him.

A 33-year-old mathematician is murdered instantly by a single shot to the back, and a student falls into a hedge with a wounded arm. Following the sniper tradition of “one shot, one kill,” Whitman never shoots anyone twice.

A young secretary who runs to help two wounded men comes under fire, and has to shield herself beneath the concrete base of a flagpole.

Whitman’s victims fall on pavements so hot the baking concrete burns their legs, arms, and faces.

He’s picking them off with apparent ease, even felling a basketball coach from a distance of 460 yards. From time to time, he changes his position behind the parapet.

Two young women are hit in the hip and thigh as they walk down a mall. One of them is pregnant, but her unborn child survives.

Others fall in quick succession, shot in the elbow, chest, wrist, leg and shoulder as they dive for cover or try and drag friends to safety…