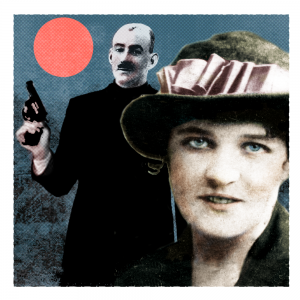 It had just started to rain as Kitty Breaks stepped on to the sands. But the dark angry sky warned that this was only a prelude to the wildness to come. Already there was the sound of distant thunder. She lifted the collar of her coat, shaking her head as though reprimanding God. But she was smiling, because she liked to feel the rain on her face. On such nights, all her troubles would soon be washed away.

She began to walk along the edge of the sea. It was December 1919, and Christmas was just two days away. In the distance, she could see the festive lights along the Blackpool front. Fortunately, she had slipped on fleece-lined boots and a thick coat which covered her knees. Even so she shivered a little as the wind lifted the flaps of her coat, placing its cold impudent fingers on the soft warm flesh of her thighs.

The waves were gradually being whipped into a fury and a jagged streak of lightning lit the night sky, followed instantly by a clap of thunder. She looked upwards, once more reprimanding this all-powerful god of the skies…reminding him that she had wanted a soothing string quartet, not a full orchestra with cymbals and drums.

Another streak of lightning spotlighted her face, and lashed by the wind and the rain the face was beautiful, almost pagan in its pleasure. Then suddenly she saw him and pleasure gave way to puzzlement and then to alarm. There was a gun in his hand and it was pointing straight at her.

For a moment, neither of them moved. “Why are you doing this?” she cried. “Tell me why.”

By way of answer, he slipped back the safety catch and she knew only sudden lurching terror. She opened her mouth to scream or to plead; but before she could do either, the gun exploded and she felt a searing pain below her breast. She fell backwards on to the sands. He stood over her. He stood astride, took aim again and fired two more shots. Then, when he was quite sure she was dead, he slipped off his gloves, dropping them beside the body…and then, almost as an afterthought, he dropped the gun too…