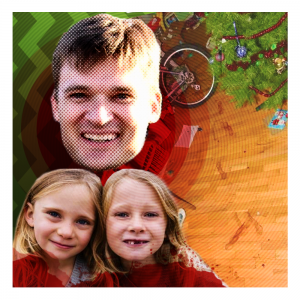 Even the few police who are on duty look forward to a nice quiet Christmas. Obviously they get the odd case of too much drinking or domestic disputes, but on the whole, it’s as quiet a time for them as it is for the rest of us.

But for Vancouver police, December 25th, 2017, was a Christmas Day unlike any other. And in the worst possible way.

That Christmas shift in the suburban station of Oak Bay, the usual skeleton staff of officers was making the most of a relatively quiet day at the heart of the festive period.

Their feelings of goodwill were soon shattered, however, after a concerned mother called up, asking for someone to make a welfare call to the Beach Road apartment home of Andrew Berry.

Separated from his partner Sarah Cotton, Berry had arranged for their children to spend Christmas Eve and the following morning with him. The two girls, six-year-old Chloe and four-year-old Aubrey, would open the presents that had been carefully laid under the tree for them.

But Sarah made repeated attempts to contact Berry during the day and, despite increasingly frantic messages, she had heard nothing back. Concerned for the safety of her girls, she called in police.

The officers first tried ringing the bell, then knocking increasingly loudly on the door of the apartment. But when there was no answer, they asked the building manager to let them in using his master key. Amidst the sparse decorations, they found a truly horrific scene.

Berry was rushed to hospital for emergency surgery, and medical staff performed miracles to stabilise him and help him eventually make a full recovery. But doctors were suspicious that the wounds seemed to be self-inflicted, and detectives feared that the deaths of the two girls were part of what had been planned to be a massacre on the biggest family day of the year.

But how had such a horrific scene come to pass?