Christina Was Battered To Death In The Shop She Managed

Christina Was Battered To Death In The Shop She Managed 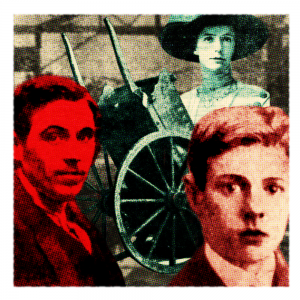 Waiting to meet his sweetheart, a ship’s steward named Eaves paced slowly up and down Oldhall Street, Liverpool on the evening of December 10th, 1913. As he was passing a shop, a shutter from the door fell on him, denting his bowler hat.

The shop seemed shut, but in a moment or two a youth emerged to pick up the shutter. Eaves, annoyed, pointed out what had happened. The boy returned inside the shop, then came out again with a young man in a grey suit who expressed his regrets. They discussed the damage to the bowler, whereupon the young man paid him two shillings in compensation.

Eaves, still waiting for his girl, presently saw the shop boy walking up the street. He was pushing a handcart in which something bulky was concealed by a tarpaulin. A little later, Eaves saw the young grey-suited man set off in the same direction as that taken by the youth – towards Waterloo Station and then, it later developed, a lock on the Leeds and Liverpool Canal.

Just after noon next day, Francis Robinson, in charge of a lighter, an open boat used in the loading and unloading of ships, was inching towards that canal’s No. 3 Lock. To get into the next stretch of water, the gates of No. 3 had to be opened by pushing on a balance pole. Robinson stepped onto the canal bank, moved his balance pole as usual, but then found that one of the gates would not open properly because of some obstruction.

Muttering to himself, Robinson returned to the lighter for a boathook, which he shoved down into the water. It first dug into something soft. And then Robinson pulled a heavy object, wrapped in sacking, to the surface.

To his horror, he saw two human legs protruding from the mouth of the sack. The legs, tied at the ankles, were clothed in black stockings…