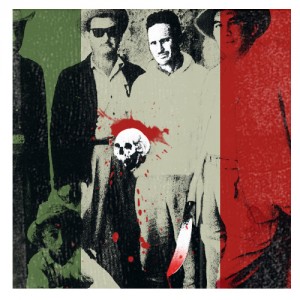 On the afternoon of September 9th, 1958, detectives Callejas and Lopez took Andres Santillan into custody at his boarding-house in Tepatepec. In a shack behind the dwelling, hidden under a piece of canvas, was his portable meat counter, a meat cleaver, saw and razor-sharp knife with a blade more than 10 inches long. Beneath the cart were two large burlap bags, still sticky with dried blood.

Taken to police headquarters, Santillan firmly denied that he had slain 12-year-old Ceferino Hernandez or any of the other missing shepherd boys. And he was indignant at the accusation that he had butchered their bodies and sold the flesh. Then the detectives sent for little Juan Hernandez.

Brought face to face with Santillan, the boy unhesitatingly identified him as the man who had attacked his cousin Ceferino.

Confronted with the boy’s statement, the prisoner broke down and confessed to the murder of Ceferino Hernandez.

“I killed him,” Santillan admitted, “but I had provocation. I offered the little toad a ride on my new bicycle and he insulted me. I lost my temper and stabbed him.”

The detectives exchanged disbelieving looks. “What were you doing out in the country with that knife and the burlap bag?” inquired Callejas.

“I was hunting a wild pig, or a stray sheep,” the butcher replied calmly. “After all, meat is scarce and I have to supply my customers.”

Then to the amazement of the officers Santillan coolly admitted that he had decapitated the body of the Hernandez boy, stripped the flesh from his bones, stuffed it into the sack and carried it back into Mixquihuala, where he sold it from his cart next day both as fresh and cooked pork. He had stopped to bury the head near the scene of the crime, and had thrown the bones into a deep canyon.

Under further questioning Santillan changed his story about the motive for the slaying. The boy had not insulted him, he admitted, but he had deliberately killed the little shepherd in order to sell his flesh. The offer of a ride on the bicycle was a ruse to enable him to attack the victim from behind by surprise.
But Santillan steadfastly denied that he had killed any of the other missing boys. He insisted that his supply of meat in previous weeks had come from wild or stray animals he had caught on his cycling trips through the countryside.

The next day Andres Santillan led the officers back to the spot near the murder scene where the boy’s head was found buried just under the surface of the ground. Then he pointed out the canyon where he had thrown the bones of Ceferino…

Read the full report in Murder Most Foul No. 103 »