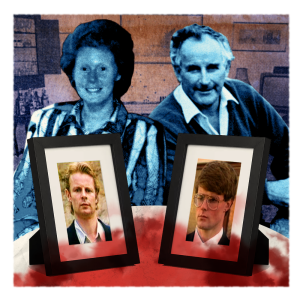 Brothers Roderick, 22, and Mark Newall, 21, handsome young fellows with blond hair, blue eyes and striking looks, had flown in from London especially for the occasion.

Here, at the Sea Crest Hotel restaurant in Jersey, the boys and their parents, Nicholas and Elizabeth, enjoyed a seemingly happy family reunion.

It was the night of October 10th, 1987. Mark paid the bill for dinner and the family returned to their luxury bungalow at Clos de l’Atlantique in the smart seaside village of St. Brelade.

There, in the early hours of October 11th, Roderick bludgeoned Nicholas and Elizabeth Newall to death.

The brothers wrapped the bodies in polythene sheeting and transported them, probably in a van hired the previous day to help Nicholas do some removing, to a remote field. There they dug the grave and buried them six feet deep.

The friend who raised the alarm on the parents’ disappearance in the days after the double-murder, said bluntly: “They treated their sons so coldly that if you treated your dog like that, you would be reported to the RSPCA. I don’t think the boys ever had a kiss or cuddle from their parents all their lives…”