Bloodbath On A Kent Holiday Beach

Bloodbath On A Kent Holiday Beach 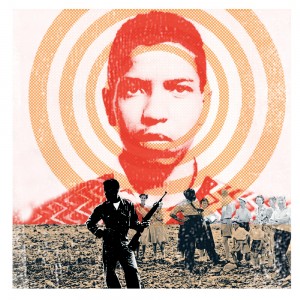 Facing the prospect of a court-martial, Napoleon Green, a young US airman stationed in Britain, virtually friendless in a foreign country, 3,000 miles from his hometown of Chicago, 22, arrived in Broadstairs Harbour. The town, dominated by Charles Dickens’ Bleak House, has a deep bay, a sandy beach and lots of villas built between the two world wars.

At 10.45 the fugitive airman parked his Ford Popular near the Tartar Frigate in Harbour Street – ominously a dead end. The 70-year-old car park attendant Fred Beecham watched in speechless amazement before running across the road and yelling, “You can’t park there!”

Green, running down to the beach, turned and shouted back, “If they want me, they’ll have to come and get me.”

And that’s precisely what they intended to do. They were an unknown number of US Air Police and 16 unarmed Thanet policemen. This was to be a combined British and American operation.

The law enforcers encircled the beach and harbour. Some lined the cliff tops with their rifles; others fanned out from the cliff on the left to the edge of the sea on the right.

Holidaymakers shouted directions to the police, and were promptly warned to keep clear. Shots were fired from the cliff top, but none hit Green. The fugitive was firing rifle bursts into the air, but he was trapped, with nowhere to go but into the sea.

One exit he might have tried was the 39 Steps, made famous by the novel of that name by John Buchan. But armed US Air Police, who were advancing towards the gunman from north and south, already covered that route.

Green could see there was no way out. If he surrendered he would be tried now not just for assaulting a girl and theft, but for a triple-murder.

That meant the hangman’s noose…

Read the full report in Murder Most Foul No. 105 »