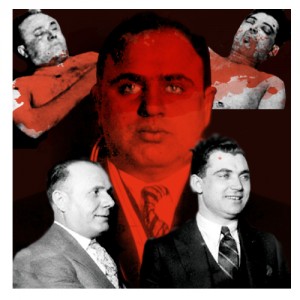 John Scalise and Albert Anselmi had entered the United States illegally in September, 1924. Both had long prison records in Italy and were fugitives from the Sicilian police, after a warrant had been issued charging them with attempted murder and operating with a band of outlaws.

After arriving in Chicago, they teamed up with the Genna brothers who, like Anselmi, came from the Sicilian seaport of Marsala. Scalise had come from the nearby town of Castelvertrano.

They made a strange pair. Anselmi, who spoke little, was short, fat and balding. The more boastful Scalise was tall, thin, with an ugly cast to his right eye that gave him a truly sinister appearance.

They also imported the handshake murder. Anselmi would clasp their victims’ hands with an iron grip while Scalise came from behind and blew off their heads. They applied this technique in the murder of North Side gang boss Dion O’Banion. The florist was working in his shop, as Angelo Genna and the Homicide Squad called to collect flowers for the funeral of Mike Merlo, president of the Unione Siciliana.

O’Banion, who was normally armed with three guns, was holding a pair of shears in one hand. He extended the other to Genna, who clasped it and jerked him forward, pinning O’Banion’s arms. Scalise and Anselmi then fired six bullets into him. The last bullet was fired at such close range into his brain that powder scorched the skin where it entered…