A Flame-Thrower In The Classroom

A Flame-Thrower In The Classroom 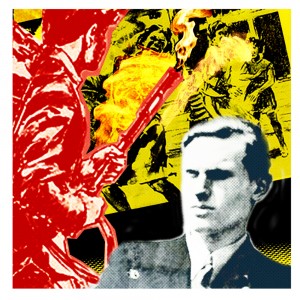 Anna Langohr, games teacher at the Katholische Volksschule (Catholic Elementary School) in Cologne, turned away from her class of nine-year-old girls ineffectually doing star jumps in the playground. There was a man walking towards her. She recognised him at once as Willi Walter Seifert, 43, a local man she would not choose to socialise with.

Seifert, a former police officer, had some kind of tank strapped across his back, like the ones scuba divers wear. He was carrying some form of rod or lance in his arms.

It was a little after 9 a.m. on June 11th, 1964 – a beautiful summer’s day that had exploded into a fiery nightmare. It would leave the Rhineland city in trauma.

“With a small pilot flame, Seifert approached the children who were at the back of the playground doing gymnastics,” said the police report. “Once there, he enlarged the flame to about six metres and pointed the flame at the children and the teacher. There was panic.”

The school consisted of a small admin building and four teaching huts, each of which contained two classrooms. Seifert made his way through the scattering, screaming girls towards one of these.

As well as the flaming lance, he also carried a medieval-style mace. With this, he smashed the windows of the classrooms – and then sent flames shooting into the teaching rooms. As children screamed, many with clothes on fire, they sought to escape through doors and windows. Seifert continued to fire at them, oblivious to their pain and suffering.

He watched, contented, as several fell to the ground, wrapped in flames…

Read the full report in Murder Most Foul No. 107 »