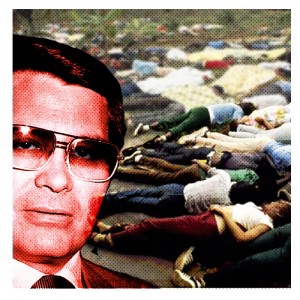 At the US Embassy in Georgetown, Guyana, a shocked consul could hardly believe the frightened woman’s story.

She was Deborah Blakey, from San Francisco, she told him, and she was on the run from Jonestown, the jungle settlement established by the Reverend Jim Jones for his People’s Temple Christian Church.

Why was she fleeing? She said that Jones, the cult’s charismatic leader, was grooming his church’s one thousand members to commit what he called “revolutionary suicide.”

Tearfully, she went on to tell how a fortnight earlier, on April 13th, 1978 – a year after Jones had moved his sect from California to the South American jungle – he had called his followers to a meeting.

Complaining of persistent persecution by the US authorities, he told his flock: ”They won’t leave us alone. They’ve followed us here, they lie about us, and they won’t give up until they destroy us. We’d be better off dead than living with all this pain.”

Turning to a nurse, he ordered: “Fetch the poison from the medical tent.”

A small number of the sect’s members were then called forward, Deborah Blakey said. Weeping and embracing each other, they said their farewells and the nurse returned with the poison.

She’d show them how easy it was, the nurse said, taking a sip from the bottle and faking a collapse. All this, Deborah said, was a rehearsal for Jones’s mass suicide plan.

Back in California, pressure was building for Jonestown to be investigated, following Deborah Blakey’s claims. Congressman Leo Ryan was selected to lead a congressional delegation to ascertain what was going on, and he announced that the party would go to Guyana on November 14th.

On hearing this, Jones ordered the delivery of a 45-kilogram drum of potassium cyanide…