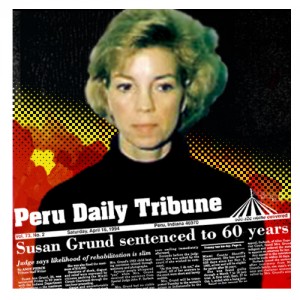 Before Susan left that day she took the gun and put it in the glove compartment of her car. Then she cooked her children their dinner and put them to bed.

She left for her sister’s at about nine. James had been working late in the office. When he came home Susan was just leaving. They waved to each other and James went inside, checked on the kids, fixed himself dinner, watched a TV programme and then went to bed.

At around one the next morning Susan drove back to her home and let herself in. She left the car round the block in a side alley. Quietly, she walked up the stairs to the couple’s bedroom, clasping the gun in her gloved right hand.

James always slept with the door open. She slipped in and stood over where he lay. At least she wouldn’t have to see his face for one last time as he was sleeping on his stomach. She put the revolver a couple of inches from the side of his temple. She squeezed the trigger. The recoil sent her reeling backwards. Where her husband’s head had lain peacefully just seconds before there was now a grisly mess of gristle and bone.

She thought she could hear one of the kids call out. She had planned her escape through the back of the house, and within seconds she was gone. She drove slowly back to her sister’s. There were no other cars on the road at that time of night.

She let herself in to her sister’s house and quietly went up to bed. Her sister hadn’t heard her leave or return. In bed Susan contemplated her night’s work. Her husband was dead, she had an alibi and no one had seen her…

Read the full report in Murder Most Foul No. 102 »