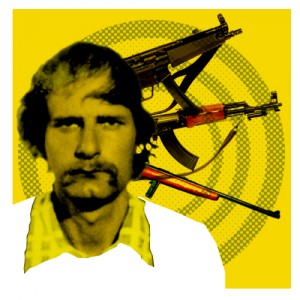 Something had snapped in David Malcolm Gray – the adrenalin flowed and he couldn’t control it. He had never understood before the sheer power of his weapons – so easy to use, so quick to spurt flame. He felt like a god with the power of life and death. He no longer felt rejected, humiliated, worthless – now, he felt sublime. He began to fire randomly at anyone he saw.

He fired at a vehicle that contained some locals. They had pulled up to see if they could help with the blaze. He swung to his side and shot at Vanessa Percy, 26, another neighbour, as she ran down the street. She fell dead face-forward on the ground.

Hearing a noise, Gray swung around once more and blasted Vanessa’s two boys, Leo Wilson, six, and Dion Percy, six – they died instantly. The boys’ sister, Stacey, four, fell to the ground, wounded in the abdomen. The children had spent the day fishing with their father, Ross, and were on their way home, proud of their catch.

Ross Percy, 42, was the next to die, brought down as he stood transfixed at the carnage of his family – and with him, his friend, Aleki Tali, 41, who had spent the day fishing on a boat off the spit with them.

Gray darted into the home of Tim Jamieson, 69, blasting him away as he entered, an astonished look on the elderly man’s face. Vic Crimp, 71, former mayor of the community, had been visiting Jamieson. Before he could react, he had also been dispatched. There were now 10 dead but for Gray, that wasn’t enough…