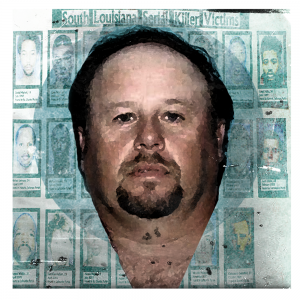 The string of bodies attributed to Ronald Dominique began appearing in 1997. “After we picked him up at the Bunkhouse we’d only been talking to him for a very short time when he started telling us everything,” said Sheriff Larpenter. “I don’t know what prompted it. Maybe he just wanted to clear his conscience.

When news spread of his arrest everyone who knew him was flabbergasted. From the convenience store where he bought his cigars to the trailer park, where neighbours remembered the nearly naked man escaping through a window and screaming for his life, most people he met remembered him as a friendly man, always polite, who would usually offer to help out with even the smallest problem.

“He was the sweetest person you could find, an everyday common person,” said a woman whose neat, red-shuttered trailer was alongside Dominique’s when he was living in the trailer park. “He was a real homebody. He drove his truck, and that’s it…”

But that wasn’t it. Ronald Dominique’s double-life came with a death toll in double-figures…